Ghana is characterised by the UNAIDS classification scheme as having a low-level generalized HIV epidemic with HIV prevalence that consistently exceeds 1% among pregnant women. Sexual transmission remains the major mode of HIV transmission in Ghana. The majority of infections (72%) occur among the general, low risk populations. Prevalence is consistently higher among women than among men in all age groups (2014 HIV Estimates in Ghana: 56% female, 44% male).

DHS 2014 reports a HIV prevalence of 2.0%. However, there are pockets of higher prevalence rates among Key Populations (KP), namely : 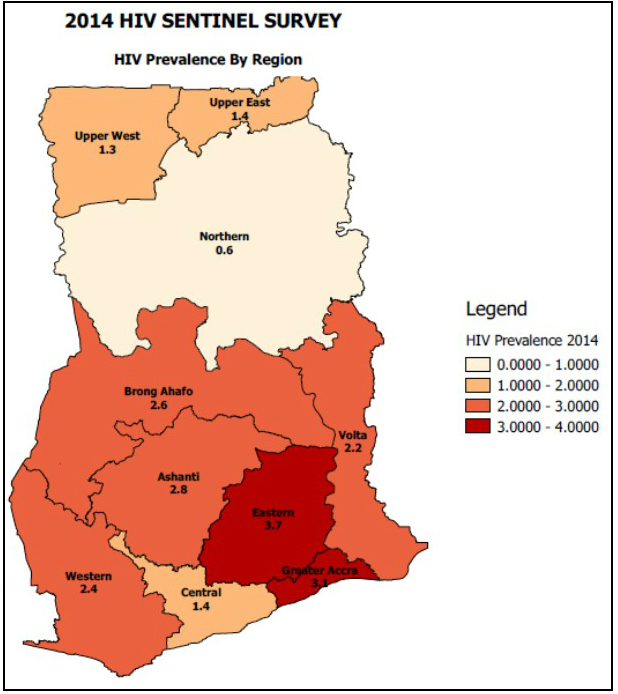 Four regions (Greater Accra, Eastern, Ashanti and Western Region) are disproportionally affected by the epidemic. They comprise 58% of the country’s population but include 75% of people living with HIV in Ghana as a whole. The four regions also contain the hot spots for female sex workers and men who have sex with men.
(Click map to enlarge)

Since 2003, when less than 1 in 10 women and men had ever been tested, there has been a consistent increase in the number of men and women who did an HIV test. According to DHS 2014, it is now 43% of the women and 20% of the men who got tested and received their result. This achievement is largely attributable to the scale up to now 2,335 testing sites (2009: 793).

In spite of all achievements, the 2014 Ghana Epidemiological and Impact Analysis highlights three risk factors of concern: