Tuberculosis occurs in all age groups, but that older males (above 45 years) bear the biggest brunt of the TB burden. Ghanaian men are particularly affected, with a male to female ratio of about 2:1. 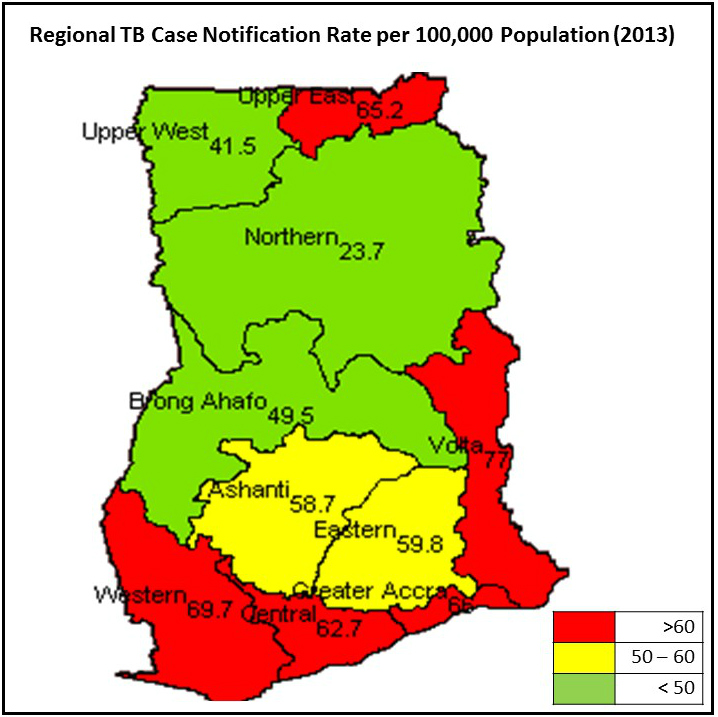 The TB epidemic is generalized with geographic variation in relation to case notification linked to better access to health facilities. Case notification rates are particularly high among people living with HIV (PLHIV), prisoners, miners, pregnant women and people with diabetes. Cases among children constitute approximately 5% of all notified TB cases.

A baseline study of HIV among TB patients revealed a co-infection prevalence of 14.7%. HIV prevalence among TB patients varied in the different regions ranging from 33.4% in the Eastern Region to 9.4% in the Upper East.The proportion of TB patients tested for HIV rose from 17% during the first year of the introduction of TB/HIV activities to 77.8% in 2012. ART coverage among HIV-positive TB patients increased from 13.9% in 2008 to 42.6% in 2013.

The exact burden of MDR-TB (multi drug resistant tuberculosis) is unknown, as a formal drug resistant survey has not yet been done. MDR-TB prevalence is estimated to have increased by 50% between 2008 and 2013. There is an obvious gap between expected MDR-TB cases and the number detected and enrolled on treatment.

The death rate among smear positive cases has been stable over the last 15 years varying between 6 and 9%. Brong-Ahafo, Northern and Upper West Regions had higher death rates while lower death rates were reported in Greater Accra, Ashanti and Western Regions. Death rates are particularly high among prisoners (32.6%) and PLHIV (20%).