Attempts to control malaria in Ghana began in the 1950s. Eradication methods then included massive drain construction, chloroquine impregnated salts, aerial spraying and weekly swallowing of daraprim called “Sunday Sunday” medicine as preventive care. Despite government efforts between 1960 and 2000, malaria continued to be one of the leading causes of premature death in the country.

The government launched an aggressive Roll Back Malaria (RBM) initiative in 1999 that emphasized the strengthening of health services through multi and inter-sectoral partnerships and making treatment and prevention strategies more widely available. In the year 2000, the first National Malaria Strategic Plan (2000-2010) was developed with the goal to reduce malaria specific morbidity and mortality by 50% by the year 2010 thereby involving a broader group of stakeholders.

Since that time, new and effective interventions such as treatment of uncomplicated malaria using artemisinin-based combination therapy (ACT), malaria prevention in pregnancy through use of sulfadoxine-pyrimethamine (SP), and indoor residual spraying (IRS) emerged.

The Abuja declaration of May 2006 aimed at achieving and sustaining universal access to appropriate interventions for all populations at risk of malaria. A second strategic plan (2008-2015) was developed to take care of these new developments as well as the Millennium Development Goals (MDGs). The National Malaria Control Strategic Plan for 2014-2020 states the overall goal of the National Malaria Control Program in Ghana as  “to reduce the malaria morbidity and mortality burden by 75% (baseline 2012) by the year 2020”.

The main priority program areas are: 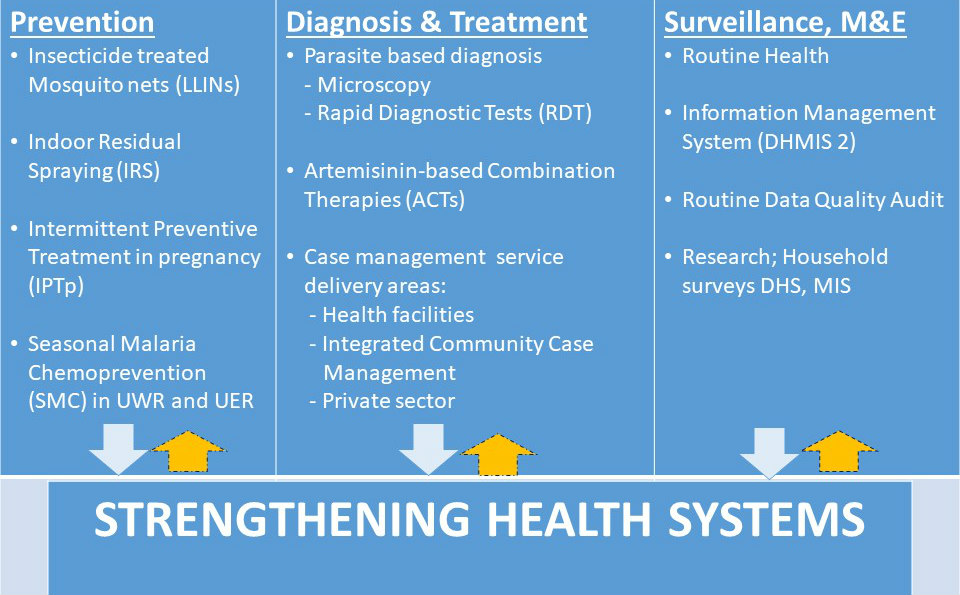 The specific objectives are as follows:

This goal is to be achieved through overall health sector development, improved strategic investments in malaria control, and increased coverage towards universal access to malaria treatment and prevention interventions. A lot has been achieved ever since.